The MCC has supplied research that determined that a motorcycle in free running motorway occupies only half the space of a car. (Read more….)

In 2020 large caravans started to be charged at the same rate as a truck. This resulted in the Minister for Roads granting a rebate. (Read more here… https://www.nsw.gov.au/news/toll-rebates-for-caravans-boats-and-horse-floats)

It has been suggested that tolls will become an issue in next year’s state election which will be held on Saturday 25th March 2023.

It’s now time to change tack and ask for a debate in Parliament to either change how motorcycles are classified in the Public Private Partnership contracts or provide us with a rebate similar to that for large caravans.

Before the introduction of the Sydney Harbour Tunnel the car toll on the Harbour Bridge was 20 cents and the toll for a motorcycle 5 cents. It is the Motorcycle Council of NSW’s view that a motorcycle toll should be a quarter of that of a car. 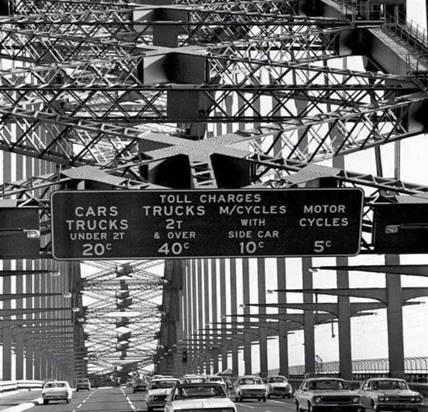 Similarly the motorcycle toll in Queensland is half that of a car, https://www.linkt.com.au/using-toll-roads/about-brisbane-toll-roads/toll-pricing/brisbane

A) A motorcycle occupies much less road space than a car.

How much road space a vehicle occupies is normally expressed in terms of Passenger Car Equivalents or Units (pcu). A car has a pcu value of unity

A copy of Professor Wigan’s report can be found at:- https://mccofnsw.org.au/wp-content/uploads/2009/01/mwigan-motorcycles-as-transport-1-00-Oxford2000Vol1_1f.pdf

While the value of 0.5 is for free flowing traffic, as the traffic becomes more congested and motorcycles lane filter, the pcu for this situation would be zero.

Therefore, a motorcycle toll based on how much road space it occupies, would be somewhere between half and zero of that of a car toll.

B: The benefit gained by a motorcyclist is less than that of a car driver

The setting of tolls is based on Transport for NSW’s “Principles and Guidelines for Economic Appraisal of Transport Investment and Initiatives, June 2018”,  however Table 1 of Appendix 4, the Value of Travel Time does not include motorcycles.

Therefore, it is necessary to use the information available to calculate the benefit to a motorcyclist.

Table 1 sets the car occupancy in urban areas as 1.4. While motorcycles can carry a pillion, the frequency of this occurring is low so the ‘occupancy’ rate for a motorcycle would be about 1.1.

Table 1 also gives the value of travel time for a private car as $16.89 per person per hour. As the toll on the M5 at the time set at $4.71 then this toll represents a time saving of 17 minutes.

As motorcycles can legally lane filter and use bus lanes, the time saving for a motorcyclist using a tollway would be less than that for a car occupant. The saving of half that of a car, or 8.5 minutes, would be a reasonable estimate.

Taking into consideration the reduced occupancy rate and the reduced saving in time, a motorcycle toll should be around a third of that of a car.

C: Cost to provide and maintain the infrastructure are the same

As bicycles are not charged to use cycleway facilities on or beside tollways, this would suggest that the toll for a motorcyclist should be somewhere between that of a bicycle and that of a car.

Current equipment is able to read a motorcycle numberplate and then process this information to charge the correct account. As motorcyclists are not required to carry an E-Tag, systems are already able to distinguish a motorcycle from other vehicles so as not to apply a charge for numberplate matching. The only change required would be the ability to charge a different rate. This ability already exists to be able to differentiate between a car and truck toll.

The Post Classic Racing Association "Festival of Speed" is on 18th and 9th Feb at Sydney Motorsports Park, GP Circuit. This is a great 2 x days of mixed motorcycle racing with easy access to viewing the PIT areas & plenty of displays. Plenty of parking requiring a short walk down hill to the Pits & Stand area.Wear some sun protection as there is not a lot of shade.www.pcra.com.au/events/old-bike-australasia-classic-challenge/ ... See MoreSee Less