In April 2021, the NMVTRC teamed up with the Motorcycle Council of NSW (MCC of NSW) to better understand the security practices of motorcycle and scooter riders in Australia.

In the 12 months to April 2020 a total of 7,318 motorcycles were stolen nationally. While the numbers are down (26%) from the previous 12 months, motorcycle theft has remained relatively stable over the past five years due to the inherent challenges of protecting bikes including ease of portability and high demand for parts.

The NMVTRC and MCC of NSW were interested in rider perceptions around motorcycle theft.  As well as, prevention measures owners currently employ to protect their bikes both when at home and out in the community.

A survey was disseminated through the MCC of NSW network resulting in 186 responses. The majority of respondents were owners of cruiser bikes, followed by tourers and sportsbikes, with an engine capacity of between 726cc and 1125cc. Most respondents were recreational riders, taking their motorcycles out once or twice a week. Six were owners of scooters/mopeds.

The survey pointed to a high level of awareness amongst motorcycle riders of the need to protect their bikes from theft when at home. Almost all riders surveyed indicated that they have access to off-street parking at home (98%), with 72 per cent keeping their bikes in a locked shed or garage. Keeping keys out of sight in the home was the most common security practice employed by riders (59%), followed by using a steering lock (48%) and an immobiliser (40%).

Of the small number of riders who did not use security devices, keeping their bike in a secure and/or alarmed garage was considered sufficient protection, or they were not concerned because their bike was insured.

Most riders (70%) considered it unlikely that their bike would be stolen from the home. This may in part be due to the high level of compliance with security practices and devices amongst the group. However, with over half of all motorcycle theft occurring from the home (57% in 2020), it is important that motorcyclists understand the importance of employing secure practices when home as well as out in the community.

Motorcycle security when out

The majority of respondents indicated that they park their bike on the footpath or street when in a public space (71%), with just 17 per cent utilising a secure public car park. Use of a steering lock was the most common theft prevention practice (61%), followed by an immobiliser (41%) and a disc lock (31%). Twenty-three riders indicated they did not employ security practices when out, with the fact that their bike is insured being the determining factor. The inconvenience of carrying security devices was also seen as a deterrent.

Interestingly, motorists’ perception of theft risk while out was more ambiguous when compared to the ‘at home’ results.

While 47 per cent of respondents did not consider it likely that their bike would be stolen when out, close to a third were unsure – indicating they felt it was neither likely nor unlikely. This points to an increased risk perception when in a public space, as well as potentially a sense of being unable to control what happens to a bike parked on the street as opposed to at home. It is also worth reiterating that the majority of riders surveyed were not daily commuters.

The survey highlighted motorcyclists’ strong attachment to their bikes.

Forty-five per cent of respondents indicated that they would be ‘extremely upset’ if their motorcycle was stolen, with a further 44 per cent who would feel ‘violated’ by knowing someone had interfered with their personal property. Along with this there was an overwhelming belief that if their bike were to be stolen, it would be unlikely to be recovered (79%), potentially heightening the sense of attachment.

Seventeen per cent of respondents had been a victim of motorcycle theft in the past.

What about scooter riders?

The demographics of scooter riders are likely to vary considerably from riders of other motorcycles, which may impact security practices used.

Survey responses revealed that when compared with other riders, scooter/moped owners were less inclined to secure their bike in a locked garage or shed (33%), with half parking somewhere at home that was not visible from the street. This may be a result of scooter riders being more likely to live in inner-city residences where there is not access to a locked garage or shed.

Amongst this group, keeping keys out of sight when at home was the security measure most employed (50%), followed by having an immobiliser and using a generic motorcycle cover. One respondent did not take security measures. The majority (83%) did not believe that their scooter would be stolen from the home (a higher proportion than owners of other bikes).

Scooter riders were more likely to ride daily. When out, most scooter riders did not employ security practices indicating that they were either unsure or perceived it to be unlikely that their scooter will be stolen when out. As in the case of other motorcyclists, almost all scooter riders would be very upset if they were to become a victim of theft.

Overall, survey responses indicate a slight trend towards fewer security practices employed amongst scooter riders when compared to owners of other motorcycles. However, due to the very small sample size it is recommended that further analysis be undertaken with a larger sample for a more accurate representation. 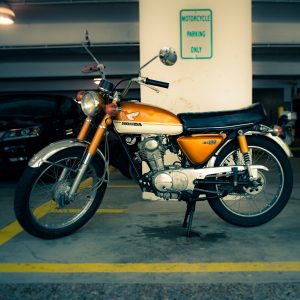 Riders also indicated a need for improved motorcycle security at the point of manufacture, in particular–

A need for a compulsory register of unregistered/off-road bikes was also noted.

The survey highlighted the very strong attachment that many riders have to their motorcycles.

In most cases, this translated to an awareness of the importance of motorcycle security and actively taking theft prevention measures. This was particularly the case in the home, where increased security practices coincided with most riders feeling that their bike was unlikely to be stolen from their residence.

Conversely, survey responses suggested less certainty about being able to protect a bike when in a public space.  There was scepticism as to whether a bike would be returned if was stolen.

With over half of all motorcycles being stolen from a residence in Australia, riders’ focus on home security is reflective of the actual level of risk. It is important that the theft risk from the home continues to be conveyed to motorcyclists to ensure good security practices are maintained, as well as the simple steps that can be taken to assist in preventing motorcycle theft in a public space.

Respondents’ reliance on their own supplementary security measures, such as installing cameras in the home sends a clear message to motorcycle manufacturers of the need for improved original equipment and point of sale security features. In particular, many survey respondents were in favour of low-cost GPS tracking.

It is recommended that theft prevention messages be tailored to specific motorcycle rider groups to ensure they reflect varying riding habits and personal circumstances.

The NMVTRC wishes to thank the Motorcycle Council of NSW for its assistance in designing and disseminating the survey.  Importantly, thank you to the survey respondents for taking the time to share their views.

Our interview with Geoff Hughes from NMVTRC in protecting your motorcycle from theft.

View all of Liz's posts.