Support the MCC’s campaign to debate why motorcycles are charged the same toll rate as cars!

It’s now time to ask for a debate in Parliament to either change how motorcycles are classified in the Public Private Partnership contracts or to provide us with a rebate similar to that for large caravans.

“While a motorcycle is smaller than a car, it occupies the same length of road on a motorway while travelling at high speeds to ensure it can come to a stop safely. For this reason, it attracts the same amount of tolls as cars.”

This false claim is also given on Transport for NSW’s website https://roads-waterways.transport.nsw.gov.au/sydney-motorways/frequently-asked-questions.html

The MCC has supplied research that determined that a motorcycle in free running motorway occupies only half the space of a car. (See below…)

In 2020 large caravans started to be charged at the same rate as a truck. This resulted in the Minister for Roads granting a rebate. (https://www.nsw.gov.au/news/toll-rebates-for-caravans-boats-and-horse-floats)

It has been suggested that tolls will become an issue in next year’s state election.

It’s now time to change tack and ask for a debate in Parliament to either change how motorcycles are classified in the Public Private Partnership contracts or to provide us with a rebate similar to that for large caravans. 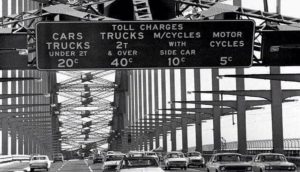 |Before the introduction of the Sydney Harbour Tunnel the car toll on the Harbour Bridge was 20 cents and the toll for a motorcycle 5 cents. It is the Motorcycle Council of NSW’s view that a motorcycle toll should be a quarter of that of a car.