At the 2011 MAW launch in Wynyard Square, Sydney 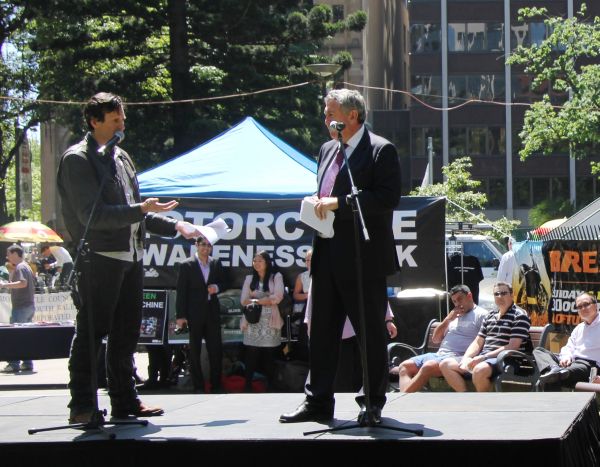 •Firstly I would like to thank the Motorcycle Council of NSW for asking me to be involved in today’s launch of Motorcycle Awareness Week.

•I’m the first to admit I have noticed an increase in the number of motorcyclists on the road these past couple of years.

•What used to be a common sight in country and regional areas of NSW is now becoming more popular in the city.

•I doubt there are many occasions on our journey into work or around the shops that we haven’t seen a couple of motorbikes.

•They’re cheaper to run, easy to park, provide a greener option for the environmentally conscious and of course they aren’t as expensive to buy as a car.

•Unfortunately, the rise in registrations has also led to an increase in motorcyclist casualties.

•Motorcyclists account for 15 per cent of road fatalities and 10 per cent of injuries in NSW despite making up less than four per cent of all registered motor vehicles.

•The sad reality is, last year there were 2,480 people injured and 61 killed in road crashes involving motorcycles across NSW.

•International research shows per hour of travel motorcycle riders are 20 times more likely to be killed in a crash than vehicle occupants.

•That’s why it is so important for the NSW Government to continue to support Motorcycle Awareness Week, which each year draws much needed attention to the crucial road safety issues for motorcyclists.

•The initiative was developed by the Motorcycle Council of NSW which represents 41 rider groups.

•The RTA’ funding during Motorcycle Awareness Week will contribute to communicating important road safety messages to riders through community riding events starting this weekend and finishing on Sunday 30 October.

•In addition, the RTA has been developing a NSW Motorcycle Safety Strategy as part of its Road Toll Response Package.

•Planning the strategy has involved workshops involving the NSW Police Force, NRMA Motoring and Services, the Motorcycle Council of NSW, the Australian Motorcycle Association, and the Motor Accidents Authority.

•A fourth workshop was held with the motorcycle rider community in collaboration with the Motorcycle Council.

•The workshops were designed to help the RTA develop a motorcycle-specific strategy which is evidence-based, relevant and effective.

•The RTA has also carried out extensive crash data analysis and research to support the strategy development.

•As part of the early initiatives of the strategy, the RTA will continue public education campaigns targeting riders and motorists.

•Crashing while cornering is also a serious problem, particularly on NSW country roads.

•Next week is the RTA motorcycle safety campaign “Safe Cornering” will start.

•This campaign encourages motorcyclists to safely approach corners, watching their speed and knowing when to brake.

•In addition to this, in regional areas, the RTA will cater for local motorcycle needs by promoting education campaigns and key safety messages to drivers and riders.

•Messages in the road environment will encourage motorists to “Check Twice for Bikes”.

•This message will be carried on banners, electronic message signs, billboards and bus-back advertising.

•The message “Drinking and riding don’t mix” will be displayed in hotels and on bus-backs to encourages riders to leave the motorcycle at home if they intend to drink.

•Riding awareness will also be brought front of mind with the distribution of motorcycle safety resources to promote the use of protective clothing and safety equipment to reduce injury.

•Information such as “The Good Gear Guide” and the “Safer Motorcycle Helmets” brochure provide important advice about choosing and buying motorcycle helmets, safety gear and other equipment. This information will continue to be promoted at motorcycle training centres, community events and to motorcycle retailers.

•The work being conducted in this area is critical to the safety and wellbeing of motorcyclists.

•It is also crucial to other road users and the many more thousands of motorcyclists who will obtain motorcycle licences in future.

•For these reasons we will continue to promote motorcycle safety to the NSW community by engaging with key groups such as the Motorcycle Council and support intiatives such as Motorcycle Awareness Week.