This year’s Motorcycle Awareness Week is going to be the biggest ever. We need all riders and delegates to spread the word and get as many fellow riders to these events as we can.

This is our opportunity to show the NSW Government we are here in large numbers, we are to be taken seriously and given due respect as voters, as citizens, and as riders that deserve a fair go.

Importantly this is the time to turn up in numbers and get noticed by one and all in the city.

York St., Wynyard Square, Sydney CBD
We kick off with the Launch of Motorcycle Awareness Week (MAW) in the centre of the City of Sydney 12:30 till 2:00pm Wynyard Square, York St Sydney this is right outside the Wynyard RTA Branch so the RTA, the Ministers and the public cannot ignore us.

Motorcycle Awareness Week Launch York St Sydney Wynyard Square.
The day will feature Jonesy of 2WSFM fame as MC,
St John’s Ambulance demonstrations of what to do
when first on scene at an accident,
a fashion parade featuring safety gear from
various apparel suppliers and static displays and
rider safety information
We also have Give Aways of 10 Double Passes to the Opening night of TT3D Closer To The Edge as well as stickers and information sheets.

Police in attendance, Ambulance service and Roads Minister Duncan Gay will be attending to address the crowd at 1.15pm.

TT3D CLOSER TO THE EDGE
The Isle of Man Tourist Trophy is the ultimate challenge for rider and machine. This visually stunning 3D feature documentary combines drama, humour, tension and tragedy to tell a very moving human story. A story about freedom of choice and the strength of the human spirit. 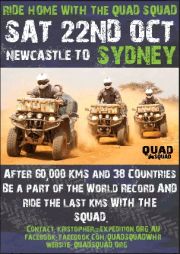 They require an escort into Sydney.

This is looking to be the ride of the year with over 1,000 expected to escort the Quad Squad into Sydney Town.

City
Hickson Road Gather here from 11:30 and tag on behind 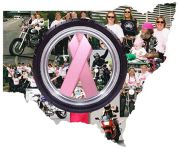 The Pink Ribbon Ride, a fund raiser for a terrific charity organised by Girls Ride Out follows on Sunday 23 of October, 9am at the Mean Fiddler and make sure you “Pink it up”. This event has raised thousands of dollars over the years and is a very popular event indeed. Pimp your ride in Pink and fly the flag for breast cancer. 9am registrations open and ribbon is cut at 10am for start of ride

Check out www.pinkribbonride.com for further details. 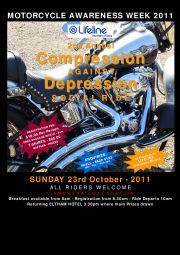 Compression Against Depression Ride
8.00am at Lismore Railway Station

breakfast from 8.00am at Lismore Railway Station Car Park.

Check out www.motorbikeshowandshine.com for further details.

10am Hexham Macca’s to Uralla,

Bikes and bullsh%$t.
Write it down, hand it over.

Breakfast Torque and A Hard Ride

Breakfast Torque at Loftus Oval, Loftus in Sydney’s south is always a favourite and regularly gets nearly 1,000 attendees. Turn up and have a good yarn, be entertained with the usual list of activities and then follow up with the “Hard Ride” as the grand finale to the week of Motorcycle Awareness Week in Sydney.

Check out www.breakfasttorque.com.au for further details.

This is your chance to follow on from the CTP Protest Rally of last year, build on it and make a change for the good for riders across NSW. Let us, as riders, change the opinion of the Government and the Departments and show them that we will not be ignored. This Motorcycle Awareness Week make the government aware of our presence, not just the drivers on the road, but the people that administer your hard earned dollars taken through your CTP, the MCIS Levy, the LTCS Levy, the road tax, the state fuel tax, your rego fees. Show them you are there and deserve respect!!

The Post Classic Racing Association "Festival of Speed" is on 18th and 9th Feb at Sydney Motorsports Park, GP Circuit. This is a great 2 x days of mixed motorcycle racing with easy access to viewing the PIT areas & plenty of displays. Plenty of parking requiring a short walk down hill to the Pits & Stand area.Wear some sun protection as there is not a lot of shade.www.pcra.com.au/events/old-bike-australasia-classic-challenge/ ... See MoreSee Less